This post is sponsored by Bob’s Red Mill. All opinions are my own.

Who doesn't love a delicious, fried and crispy Latke during the Hanukkah holiday with a dollop of sour cream?! These Latkes are just those but a bit elevated, made mini and with a Gremolata topped vegan sour cream, to satiate all your Hanukkah cravings!

Once of the most important parts when making a Latke is squeezing out the excess liquid from the shredded potatoes but mixing it the rest of the ingredients. Squeezing out the liquid will yield in a Latke that holds together better and doesn't fall apart. But, there is a downside to squeezing out that potato liquid, you loose the natural potato starch with it.

This is why I've brought in our helpful friends today at Bob's Red Mill, who create Potato Starch, so we can add it right back to the latke mixture to help give it stability and hold together! The Bob's Red Mill Potato Starch helps give structure back to the Latke that was lost when the liquid was squeezed out from the potatoes. This is a win win! Less liquidly latkes and more starch!

WHAT YOU'LL NEED FOR THIS RECIPE

For the Parsley-Cilantro & Walnut Gremolata:

HOW TO MAKE LATKES

Latkes are made in a few simple steps and require little effort, but a lot of frying.

*Be sure to preplan doubling your recipe in advance if you'd like to make more latkes. This recipes makes 8-10 small latkes, so feel free to double, triple, or quadruple the recipe.

But don't forget about the Parsley-Cilantro and Walnut Gremolata over Vegan Sour Cream!

QUESTIONS YOU MAY HAVE

Can I double or triple this recipe?

Absolutely! Feel free to double, triple or quadruple this recipe as you like.

Can I make the latkes larger that ¼ cup scoop?

For sure! Go for it.

Latkes are fried potato pancakes with are traditionally enjoyed on the Holiday of Hanukkah.

Here are some delicious recipes you may love for Hanukkah this year! 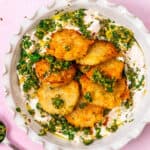 Print Pin
No ratings yet

For the Parsley-Cilantro & Walnut Gremolata:

Hi, I'm Dalya, a trained Chef & Recipe Developer. I can't wait to teach all gluten free foodies how to cook and bake with confidence!